The CBC website has an article claiming Oilsands research could be ‘game changer’ for renewable energy. I’ll summarize the interesting bits. 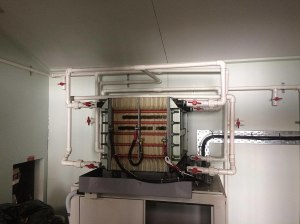 Originally from South Africa, JT Steenkamp is testing out a new type of battery at Shell Canada’s research centre in Calgary. The battery is built using a little-known metal found in bitumen. An unusually frigid prairie winter is perfect for his research.

Shell’s project aims to extract a metal called vanadium from bitumen and use the material to produce large, utility-scale electricity storage for the renewable energy sector, which has struggled with ways to store large amounts of energy in a stable, reliable way.

Steenkamp has constructed what’s called a vanadium redox flow battery inside a garden shed, which is powered by solar panels above the research centre. The battery is run through continuous cycles of charging fully, then draining completely. Data is collected to gauge its performance, which so far is promising, according to Steenkamp.

According to Wikipedia, the main advantages of the vanadium redox battery are:

So far, the vanadium battery can only hold a charge of six kilowatt hours, enough to run a hairdryer for about four hours. It would need to be much larger to store electricity from a wind farm or solar field, but Steenkamp says this type of battery can easily be scaled up.

“Biggest challenge is the cost,” Steenkamp said. “It’s the classic problem of flow batteries and why we are here: Can you find this stuff in enough quantity and at a low enough cost to make large-scale energy storage viable?”

In the oilsands, Vanadium is one of the metals that comes out of the ground with bitumen. The concentration is quite low: a barrel of bitumen would contain just 30 millilitres of vanadium, on average, experts says. But multiplied by the millions of barrels of production from the oilsands every day, Steenkamp says there is a “boatload” of vanadium.

The research project is funded in part by Alberta Innovates and the Alberta government. As the province adds utility-scale renewable energy projects like wind and solar, several projects are underway to create electricity storage. Massive batteries would be able to collect electricity when the sun is shining and the wind is blowing, and dispatch the power during times when it’s most needed. Without storage capabilities, renewable energy production still has to be backstopped by natural gas or other types of traditional power plants.

I'm a software developer, and a writer of both fiction and non-fiction, and I blog about movies, books, and philosophy. My interest in religious philosophy and the search for the truth inspires much of my writing.
View all posts by jimbelton →
This entry was posted in science and tagged first wind, jt steenkamp, oilsands, shell canada, vanadium redox battery. Bookmark the permalink.