The Secret Book of John: Creation of the Material World

Among the ancient Gnostic manuscripts rediscovered in modern times, the Secret Book of John is one of the most important. It a sacred reservoir of Gnostic myth and revelation.  It breathes with the life of vision that vitalized early Christianity, a life suppressed and then largely forgotten in later ages. A modern reading grants fundamental insights into the lost foundations of Christian tradition.

In the sixth chapter, God’s messenger tells John how the material realm was created:

Sophia, the Aeon who was of God’s inventiveness incarnate, had an idea that was her own, and not a thought of the invisible Spirit and Foreknowledge. She desired to have a form appear from within herself without the will of the Spirit, nor its approval, and without a partner, nor his consideration, for masculinity did not approve of her looks, and she had not found her partner. She deliberated without the will of the Spirit and the understanding of a partner.

Because of the unconquerable power within her, Sophia’s thoughts did not remain idle. She 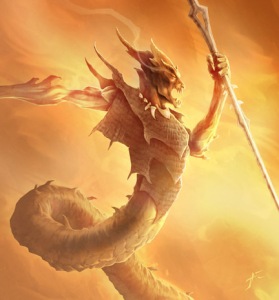 brought forth a being, but he was imperfect, and his pattern different from her own because she had created him without a partner. He did not look like her, but rather had the face of a lion and the body of a serpent. His eyes were like flashing fire and lightning.

Sophia cast him away from her, on the edge of the heavenly realms, so that none of the other immortals would see him, for she had cre­ated him in ignorance. She surrounded him with a luminous cloud. She placed a throne in the middle of the cloud so that no one would see him except the holy Spirit, the mother of the living. She named him Yaldabaoth. He was the Chief Archon, due to the great power he inherited from his Mother.

Yaldabaoth withdrew from Sophia and abandoned the placed where he had been born. He seized another realm, created it for himself inside a blaze of luminous fire, which still exists to this day. He was stupefied by the madness that dwelt within him, and created some offspring to be his Exousai (authorities).

The name of the first was Athoth, who future generations would call the reaper. The second was Harmas, the eye of envy. The third was Kalila-Oumbri. The fourth was Yabel. The fifth was Adonaiou, who was also called Sabaoth. The sixth was Cain, whom the generations of humanity call the sun. The seventh was Abel. The eighth was Abrisene. The ninth was Yobel. The tenth was Armoupieel. The eleventh was Melcheir-Adonein. The twelfth was Belias, the lord over the depth of Hades.

Yaldabaoth set up seven kings to rule over the seven heavenly spheres, and five over the depth of the abyss.

Here are some notes:

Next Chapter: Creation of the Seraphim

I'm a software developer, and a writer of both fiction and non-fiction, and I blog about movies, books, and philosophy. My interest in religious philosophy and the search for the truth inspires much of my writing.
View all posts by jimbelton →
This entry was posted in philosophy and tagged abel, abrisene, adonaiou, aeon, archon, armoupiel, athoth, belias, cain, christianity, gnosticism, hades, harmas, kalila-oumbri, melcheir-adonein, sophia, the secret book of john, yabel, yaldabaoth, yobel. Bookmark the permalink.

2 Responses to The Secret Book of John: Creation of the Material World