Is Private School Worth the Money?

According to Zoe Williams of the Guardian, Soon there’ll be no reason for any parent to send their children to private school. While things are different in the UK, in Canada, the argument against sending your child to public school is a strong as it’s been in my lifetime. What does Williams have to say?

In a radically changed landscape, a familiar row erupts. Should parents meet the interruption of their children’s schooling en masse, make collective demands of the government for more emergency funding, and also remodel collectively what allowances they’re going to make for this generation? Or should those who can afford to, go private, and everyone else squander their energy arguing with them on Facebook? Obviously I think the former.

What the hell is she on about? Presumably that parents should lobby the government to spend additional funds on state education.

Yet a significant enough number think the latter that the Independent Schools Association has described an upsurge in enquiries, from what they describe as “high-aspirational, worried” parents. The language is disingenuous and imprecise; all parents worry, all parents aspire to a good education for their children. The argument – even while academics point out that this will merely widen the educational inequality that already existed before the pandemic – suits private schools all the same. The more the data rams home the difference between a state and a private education, the greater the hit parents will take to their incomes in order to hurl their children to the right side of that chasm.

This seems to go against Williams thesis that there’ll soon be no reason to send a child to private school.

And the differences are marked: one survey has shown that just 3% of state primary and 6% of state secondary schools managed to provide “live” online lessons, compared with 59% of private primary and 72% of private secondary schools. Teachers from most settings agree that this will show in September: privately educated students will be more advanced.

Again, this seems a compelling argument against her premise.

Will their advantage persist for a short time, and be flattened out by the end of their school careers? We don’t yet know, and the gamble that it won’t is plainly a source of anxiety.

The advantages of learning how to learn are lifelong. Rote learning provides only a very short term advantage. State indoctrination is detrimental to success.

Yet the fundamental problem is that the whole arc of formal education is to create robust social structures – combining authority, competition and fellowship – which underpin the idea that learning is important, and has meaning. The enforcement drops away as the student matures until, in an ideal world, they reach adulthood having found their own meaning, their own sense of what’s important. Nobody has it at 10, or 12.

The purpose of education should be to learn how to learn. Authority serves mainly to stifle creativity. Competition is useful if you have peers who are equal or more advanced than you are. Fellowship is useful for learning social skills. How many people finish public school having found “their own meaning”? Even in university, the vast majority are tourists. Very few find their life’s calling.

Without all the architecture that we could loosely describe as “other people”, I would sincerely doubt that any of my kids have progressed very far in formal terms.

Very few children are self directed, especially after they’ve been institutionalized by a state school.

The arguments for private schooling are all either brutish (I don’t care about other people’s children), or sentimental (I can’t put politics above my child), or arrogant to the point of silliness (state schools are excellent, but my child is too special for your excellence). The arguments against it become rancorous very fast, being personal by definition. I went to a private school myself, and have argued too many times that I don’t think 11 is an age of political responsibility.

Caring about your own children is not “brutish”. If putting politics above your child means sending them to a state school even when you could afford better, I question your politics. State schools are not excellent, though some are better than others.

Yet sometimes there’s enlightenment to be had. These debates are boring because they haven’t changed in 40 years; but the underlying economic conditions of the world we’re educating our children for have changed enormously. When you look at the decision to go private through an economic, rather than an ethical or social lens, it takes on a different hue.

There is no ethical dilemma here. Socially, a private school will likely also be superior to a state school. State schools are full of kids who don’t want to be there, and disrupt the learning of those who do. Private schools have the luxury of ejecting problem children. Economically, you are trading your own resources for your children’s future benefit.

With school fees, one is generally not buying entry into an elite, but into a solid upper middle-class – networked, privileged and, above all, insulated. The networks and the privilege persist. Even while state schools have closed the attainment gap over years of furious testing and measuring, certain universities and key professions haven’t caught up, and still select disproportionately from the private sector.

Education does not buy entry into the private sector. Paper credentials may gain you admission to a university, but (in Canada at least) high school graduation will do little else. How valuable is the peer group you develop? Before university, it’s next to useless. Even in university, very few of your peers will be your future colleagues. If you find a worthy calling, your classmates will probably go elsewhere.

If your long game is to get your child into a Russell Group university, your school fees investment probably still makes sense.

Getting into a good university will pay some dividends if your kid finds a profession worth doing based on their higher education. Otherwise, it’s largely a waste of money.

Rather, parents seek a more amorphous social advantage, membership of a class to whom certain things don’t happen: insecure housing; a sense of being disposable and impotent in the labour market; a debt overhang; a crushing sense of uncertainty about the future.

If your child goes to university, they will almost certainly have a debt overhang, unless you are paying their way. A private school education will do nothing, and a university education little, to make your child secure in the changing labour market. These days, you need to find something that you actually enjoy doing, so that you can excel at it, be able to continually learn, hone new skills, and be adaptable to changes in the market.

As recently as 30 years ago, the story of inequality was the top 10% versus the rest. That’s no longer the case. The expectation of home-ownership – a fundamental means of acquiring capital and security rather than expending labour limitlessly to service rents – has already evaporated for even the comparatively well-paid. Wage stagnation, which until the financial crash was mainly a blight for the median and low paid, has reached higher earners.

Wages in high tech have been steadily increasing. You need to find a calling that is profitable. Real estate in large cities is indeed unaffordable, making it hard to get ahead. With today’s ability to telecommute, it’s now possible to work from much more affordable suburbs or even small towns. I couldn’t afford to buy in my parent’s municipality, and ended up moving to one that’s 35 minutes from downtown to buy a house with a yard for my kids. Today, I might end up closer to an hour away. Two hours of commuting isn’t that big a deal if you only do it a couple of times a week.

Factor in automation – which poses a risk to one in six middle-class jobs – and the climate crisis, and the direction of travel is emphatically not towards a stable middle class that can weather economic pressures so long as it keeps a high barrier to entry.

Automation may well create more jobs than it eliminates for children who are well educated. It is those who are not who will suffer most. Similarly, global warming will bring new opportunities in green energy and the environmental sector. In northern climes, it will actually improve the productivity of farms and reduce the amount of money we spend on–and CO2 we emit by–heating our houses.

It’s not distinguishing or future-proofing children to separate them from the masses by means of segregated education – it is keeping them apart from the allegiances they will need. School fees, indeed, are a stranded asset – dues to a club that in 20 years time may no longer exist.

The allegiances one makes in public school are no loss. The real question is, once they graduate, will private school still confer a benefit on your children that is worth the extra money you will spend to give it to them? Today, with all the resources on the Internet, what advantage to kids really get from private school that–if they’re self motivated–they can’t get on their own? 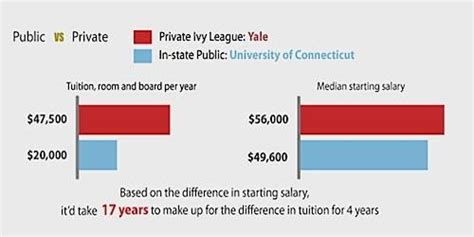 Even assuming starting with a higher salary doesn’t mean being on a better career trajectory, within 17 years, the extra tuition required to attend an elite US university pays off.
From my own experience, Salesforce.com pays top dollar salaries, and Salesforce hires a lot of Stanford grads. I’m sure they hire grads from state colleges too, but while I worked there, I only remember hearing Stanford mentioned by people in the San Francisco head office.

I'm a software developer, and a writer of both fiction and non-fiction, and I blog about movies, books, and philosophy. My interest in religious philosophy and the search for the truth inspires much of my writing.
View all posts by jimbelton →
This entry was posted in philosophy and tagged automation, education, global warming, private school, public school, university. Bookmark the permalink.

1 Response to Is Private School Worth the Money?