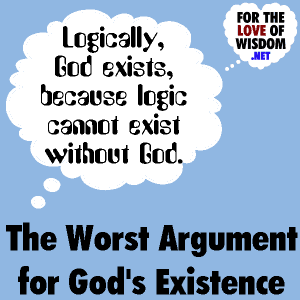 Another day, another video by Stephen Woodford video to criticize. In the case of Matt Slick’s Transcendental Argument – Debunked, Woodford has made things easy. He begins by restating Slick’s argument:

So does Matt Slick’s unaltered argument prove the existence of God? Not at all. Where Woodford’s simplified description of Slick’s argument falls down is in the claim that failure to account for logical absolutes makes atheism untrue. Just because a theory doesn’t explain a phenomena doesn’t make the theory untrue. A phenomena must contradict the theory to disprove it. No definition of atheism I’m aware of makes the claim that there are no logical absolutes.

Slick’s logical leap is that since logical absolutes are neither products of the physical universe nor products of the human mind, they must have been produced by an absolute transcendent mind. Why? Slick’s answer:

Not being able to explain why something exists does not make it untrue. This argument is equivalent to “We can’t explain the existence of logical absolutes, therefore God”. Slick further adds that if we argue that Logical Absolutes are uncaused:

I neither deny the existence of the supernatural nor aver it. I am an agnostic. I agree with Slick that the naturalist claim that logic can be fully derived from the natural world is rubbish. Logic and mathematics are entirely subjective things that we can only approach in the mind, and yet if there were no mind to think them, they would still exist. Is that because they are the creations of the mind of God? I don’t think we can answer that question.

I'm a software developer, and a writer of both fiction and non-fiction, and I blog about movies, books, and philosophy. My interest in religious philosophy and the search for the truth inspires much of my writing.
View all posts by jimbelton →
This entry was posted in philosophy and tagged atheism, god, logic, matt slick, rationality rules, transcendental argument. Bookmark the permalink.