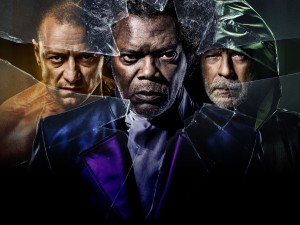 Once again, the critics get it wrong. “Glass”, the sequel to M. Night Shyamalan’s fantastic “Split“, which in an epilogue twist was revealed to be the sequel to his second film, “Unbreakable”, is a worthy conclusion to the trilogy. The ending is surprising and I can certainly see why it disappointed some. It was the film’s weak point, though it tied the story up nicely. The critics gave it a mere 37% rating on Rotten Tomatoes.

The film opens as David Dunn (Bruce Willis) and his son Joseph (Spencer Treat Clark, who played young Joseph in Unbreakable) are on the hunt for The Horde (James McAvoy), who are back to kidnapping young women, hoping to release The Beast once more. Dunn and The Horde are captured and put in the care of Dr. Ellie Staple (Sarah Paulson of American Horror Story), along with Mr. Glass (Samuel L. Jackson).

Staple claims to be an expert in the rare disorder that makes the three think that they have superhuman powers. She enlists Casey Cooke (Anya Taylor-Joy), The Horde’s former captive, to help her reach Kevin Wendell Crumb, The Horde’s alter ego. Meanwhile, Mr. Glass, who has been sedated for the past 15 years, has been playing the long game, and still hopes to show the world that super-humans exist.

I won’t spoil the several twists that occur. Watching Mr. Glass and Dr. Staple play cat and mouse is entertaining, Willis is solid as Dunn, and McAvoy once again steals the show playing the various personalities of The Horde. While the ending prevented me from enjoying the film as much as Split, I agree with the Rotten Tomatoes audience, who gave the film a 72% fresh rating.

I'm a software developer, and a writer of both fiction and non-fiction, and I blog about movies, books, and philosophy. My interest in religious philosophy and the search for the truth inspires much of my writing.
View all posts by jimbelton →
This entry was posted in movies and tagged anya taylor-joy, bruce willis, casey cooke, david dunn, dr ellie staple, glass, james mcavoy, kevin wendel crumb, m night shyamalan, mr. glass, rotten tomatoes, samuel l jackson, sarah paulson, spencer treat clark, the horde, unbreakable. Bookmark the permalink.