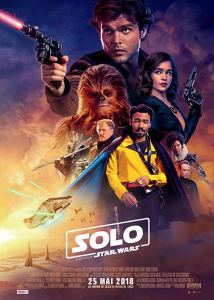 Considering the fact that Solo: A Star Wars Story lost more than 85 million dollars, it was actually pretty good. I agree with critics that it got off to a shaky start, but the first act was easily made up for with a strong second act, in which Han (Alden Ehrenreich) rescues Chewbacca (Joonas Suotamo) from his imperial captors and they join the crew of Tobias Beckett (Woody Harrelson) on a mission to steal coaxium (hyperfuel) for a group know as the Crimson Dawn crime syndicate.

The final act, easily the best, sees Han, Chewbacca and Beckett team up with Han’s old girlfriend Qi’ra (Emilia “Kalissi” Clarke) to steal raw coaxium from Kessel, a planet at the center of a harsh gas nebula created by the gravity well of a black hole known as “the maw”. They must get the raw coaxium to the refinery on  Savareen before the unstable substance explodes, so they enlist Lando Calrissian (Donald Glover) and his ship, the Millenium Falcon.

Easily the worst thing in the film is Lando’s rebellious droid, L3-37 (Phoebe Waller-Bridge). Fortunately, she is killed in the second act. I think this character could have been done right, by giving the droid a much more human form, and a more seductive and less preachy character. As it was, she was fairly insufferable, but did serve her part in the plot.

Will there be another Star Wars Story? I hope so. I would love to see Ewen McGregor return in the role of young Obi Wan Kenobi. I liked the character of Qi’ra, and the dark role in Crimson Dawn hinted for her at the end of the film. We’ll see how Lucas Film reacts to their first flop, and what changes they make episode IX.

I'm a software developer, and a writer of both fiction and non-fiction, and I blog about movies, books, and philosophy. My interest in religious philosophy and the search for the truth inspires much of my writing.
View all posts by jimbelton →
This entry was posted in movies and tagged alden ehrenreich, chewbacca, coaxium, donald glover, emilia clarke, han solo, joonas suotamo, kessel, l3-37, lando calrissian, millenium falcon, phoebe waller-bridge, qi'ra, solo a star wars story, tobias beckett, woody harrelson. Bookmark the permalink.