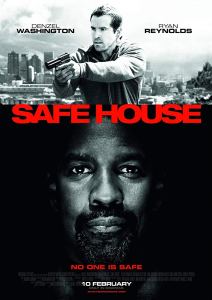 Safe House is a spy thriller involving a bored CIA agent, Matt Westin (Ryan “Deadpool” Reynolds), in charge of a safe house in South Africa is suddenly plunged into danger when renegade agent Tobin Frost (Denzel “Equalizer” Washington) is pursued into the US embassy by assassins. He manages to get his girlfriend Ana (Nora Arnezeder) to safety before all hell breaks loose.

Frost has a secret dossier, and everyone is after it. Frost, Westin’s handler Barlow (Brendan Gleeson) and the CIA’s head of operations in South Africa, Catherine Linklater (Vera “Lorraine” Farmiga) contend with each other, while mysterious enemies come after Frost and Westin does his best to keep the rouge agent in custody while preventing his assassination. The ending is somewhat predictable, but still satisfying.

The acting is solid, the writing predictable, and there is some nice cinematography, as well as some very good car chase scenes. If you’re a fan of the spy thriller genre, I recommend this film.

I'm a software developer, and a writer of both fiction and non-fiction, and I blog about movies, books, and philosophy. My interest in religious philosophy and the search for the truth inspires much of my writing.
View all posts by jimbelton →
This entry was posted in movies and tagged brendan gleeson, catherine linklater, denzel washington, matt westin, movie review, nora arnezeder, ryan reynolds, safe house, spy thriller, tobin frost, vera farmiga. Bookmark the permalink.