In Vox, Ezra Klein determines the problem with Twitter, as shown by the Sarah Jeong fracas. Does he get it right?

Much of the Jeong furor has been about actually racist alt-right trolls weaponizing old tweets in bad faith to get an Asian woman fired from an important job. The New York Times refused to be cowed, and good for them.

This reminds me of the Democrats being upset with the Russians for leaking the DNC emails that showed that the Democratic National Congress had colluded with Clinton to cheat Bernie Sanders. The fact that (maybe) the Russians or (so-called) alt-right trolls were the source of real, damning information doesn’t make that information untrue or irrelevant. The Times, by admitting they knew about Jeong’s racist and sexist views and hired her anyway, reveals an astonishing level of bias. No wonder print media is dying.

Are Jeong’s tweets the equivalent of [an] old woman yelling racial slurs at a bank teller — that is to say, are they an actual expression of animus towards real people? Or are the critics making that argument engaged in an absurd form of literalism, refusing to recognize ironic discourse even though it’s been repeatedly pointed out to them?

Unless you are saying that white men are not real people, her tweets were racial and sexist slurs against real people. They may have been ironic. So are rape jokes. That doesn’t make them OK.

A few years ago, it became popular on feminist Twitter to tweet about the awful effects of patriarchal culture and attach the line #KillAllMen. This became popular enough that a bunch of people I know and hang out with and even love began using it in casual conversation.

And so you stopped loving and hanging out with them?

That is the correct reaction.

But I also knew that wasn’t what they were saying.They didn’t want me put to death. They didn’t want any men put to death. They didn’t hate me, and they didn’t hate men. “#KillAllMen” was another way of saying “it would be nice if the world sucked less for women.” It was an expression of frustration with pervasive sexism. I didn’t enjoy the way they said it, but that didn’t mean I had to pretend I couldn’t figure out what they meant. And if I had any questions, I could, you know, ask, and actually listen to the answer.

Bullshit. It was what they were saying. They may not have meant it, but they did say it. Perhaps you were just their token male friend that they used to prove that they weren’t sexist.

Here’s the other thing, though: all that was happening inside my community, which both inclined me towards generosity, and gave me more context for what was going on. If I had been on the outside of it, perhaps my ultimate reaction would’ve been different, perhaps I would’ve let my initial offense drive my interpretation.

Perhaps you wouldn’t have rationalized away their blatant misandry.

The same dynamic seems to me to be at play in the way “white people” is used in Jeong’s jokes. On social justice Twitter, the term means something closer to “the dominant power structure and culture” than it does to actual white people. To read “#CancelWhitePeople” and think Jeong is calling for genocide, as New York magazine’s Andrew Sullivan apparently does, is absurd. And to sit around wondering how the social justice left would respond if you completely changed the context, intent, and meaning of the tweets by subbing in the names of different groups, well, read Zack Beauchamp on that.

By calling her statements ‘jokes’, you are minimizing them. If you want to say “the dominant power structure and culture”, say it, or use an expression like “The Man” or “the establishment”. To not read #CancelWhitePeople as a call for genocide is absurd. It’s fine when you do it, but not when Candice Owen (a black woman) does it.

But after reading take after take after take on the latest round of our ongoing Twitter wars, I’m struck by how inexplicable both sides seem to the other. To much of the right, it’s obvious that Jeong’s tweets represented anti-white racism in its purest form; to much of the left, it’s obvious they were jokes that anyone with an iota of self-awareness could parse, and the affront taken at them is pure bad faith.

It is obvious that Jeong’s tweets represent anti-white racism (and misandry). She may have meant them as jokes. Like I said above, just because a rape joke is a joke, that doesn’t make it OK. You can’t have one standard when you don’t like something or someone, and another when you do, and not be called a hypocrite. 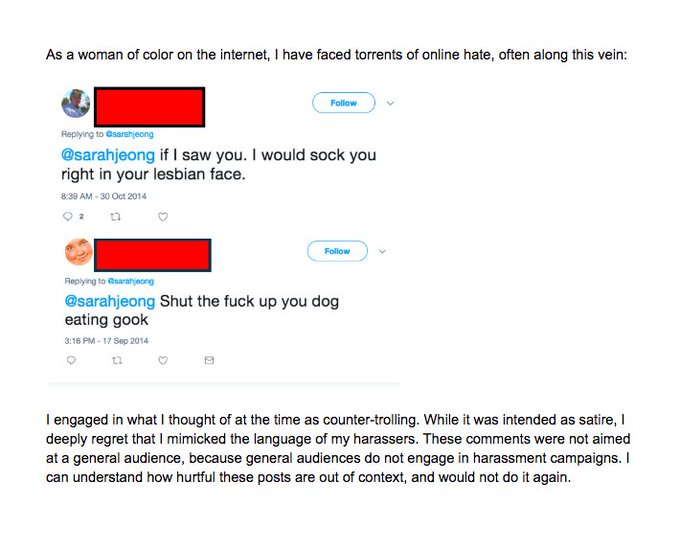 Everyone faces abuse on the internet. Just because someone did it to you, doesn’t make it OK for you to do it to an entire race. If you tweeted back at one of these people, no one would care (except perhaps, the person you were responding to). But nasty comments from trolls do not justify blanket statements against an entire race.

The real villain here, as it so often is, is Twitter.

Twitter did not call for a white genocide. Are you saying that they should have banned Jeong?

Twitter is weird. A huge amount of what’s written there is metatextual commentary on other tweets intended for a knowing audience reading in a specific moment. It’s an ephemeral, self-referential mode of discourse that is unfortunately not ephemeral or tied to reference points at all — in fact, it’s designed to be broadcast, archived, searched, and embedded by anyone, in any context, at any point in the future.

I agree that tweets are prone to being taken out of context. If that happens, you should explain the context. Because Twitter is a broadcast medium, you need to assume that anything you say on it can be read by anyone, not a knowing audience. Only an idiot would fail to understand this, and since Leong is Harvard educated, I assume she knew full well that she was broadcasting to the world.

This is why you need to be careful about what you say. Irony and hyperbole have their places, but plain speaking is usually a better idea, especially in a written medium where facial expressions are lost.

There happened to be a particularly amusing bit of context collapse buried in this whole saga. One of Jeong’s most vocal critics was Sullivan, who wrote a slashing column accusing her of “eliminationist” rhetoric, among other sins. Turns out one of the tweets he was referencing was about him, though he didn’t know it and certainly didn’t take the time to trace it back and find out.

Klein goes on to explain how Jeong’s “white people are only fit to live underground like grovelling goblins” was indeed taken out of context (see his article for details). However, both Jeong and Klein missed the point that Sullivan was making, that wrong opinions should be examined and debated, not policed. That Sullivan failed to realize Jeong’s tweet was in reference to his statement is unsurprising. She certainly picked a poor straw man argument to throw out in a stand-alone tweet.

It’s not just context collapse, though. Part of constructing your community on Twitter is bounding it. Part of winning retweets and likes is sending missives your community will love. Given how human beings police group boundaries, that means making jokes only your friends understand, slamming common enemies, expressing sentiments in ways that signal group belonging.

If you want to bound your Twitter community, you must make your account private. Even then, if one of your friends retweets you, you may be talking to the world again. If you want to build a private group, why are you using Twitter?

Twitter is a medium that rewards us for snark, for sick burns, for edgy jokes and cruel comments that deepen the grooves of our group. And then it’s designed to make the sickest of those burns and the worst of those jokes go viral, reaching far beyond their intended audience, with untold consequences. That’s good for engagement on the platform, but it’s often bad for the people it happens to.

Right. Be careful what you shout from the rooftops.

Twitter is not your friend. It is built to reward us for snarky in-group communication and designed to encourage unintended out-group readership. It fosters both tribalism and tribal collision. It seduces you into thinking you’re writing for one community but it gives everyone the ability to search your words and project them forward in time and space and outward into another community at the point when it’ll do you maximum damage. It leaves you explaining jokes that can’t be explained to employers that don’t like jokes anyway.

Twitter is a business. It’s purpose is to offer you a means of communication in exchange for money provided by advertisers. In the end, those advertisers are Twitter’s customers, not their end users. You are responsible for what you tweet.

The very first tweet was sent in 2006. This is a young medium, and over time, we’ll (hopefully) figure it out — how to interpret it, how to couch it, how to delete old tweets automatically. But for now, the lesson is clear: #NeverTweet.

I agree that Twitter is not the best medium for political conversation. However, “talking is dangerous” is the wrong lesson to take from Jeong’s troubles. The thing to do is to be careful what you say, and to provide enough context to be able to explain it if questioned about it.

I'm a software developer, and a writer of both fiction and non-fiction, and I blog about movies, books, and philosophy. My interest in religious philosophy and the search for the truth inspires much of my writing.
View all posts by jimbelton →
This entry was posted in philosophy and tagged #killallmen, alt right, democratic national congress, misandry, new york times, sarah jeong, twitter, white genocide. Bookmark the permalink.