Claire Cain Miller of The New York Times ask the question How Did Marriage Become a Mark of Privilege? Let’s see if she can determine the answer.

Fewer Americans are marrying over all, and whether they do so is more tied to socioeconomic status than ever before. In recent years, marriage has sharply declined among people without college degrees, while staying steady among college graduates with higher incomes.

Since the welfare state has made it economically beneficial for single mothers to remain single unless they find a husband with a significant income, this is unsurprising.

Currently, 26 percent of poor adults, 39 percent of working-class adults and 56 percent of middle- and upper-class adults ages 18 to 55 are married, according to a research brief published from two think tanks, the American Enterprise Institute and Opportunity America.

The more you make, the bigger the difference you can make over what the government will pay you in welfare. Is it any surprise that the poor have such a low percentage of marriages, when often, marrying will mean a single mother has less income?

This is bullshit. The unemployment rate in 1990 was higher than it is now:

As marriage has declined, though, childbearing has not, which means that more children are living in families without two parents and the resources they bring.

This is more bullshit. The crude birthrate in the US has declined by more than 25% since 1990: 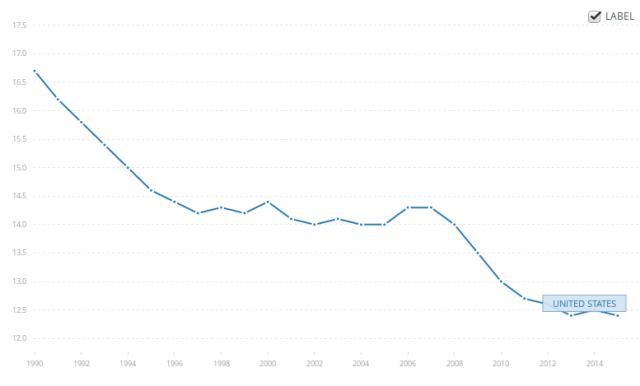 Just over half of adolescents in poor and working-class homes live with both their biological parents, compared with 77 percent in middle- and upper-class homes, according to the research brief, by W. Bradford Wilcox and Wendy Wang of the Institute for Family Studies. Thirty-six percent of children born to a working-class mother are born out of wedlock, versus 13 percent of those born to middle- and upper-class mothers.

And children of single mothers are more prone to a host of problems, including criminality.

Evidence shows that the struggles of men without college degrees in recent years have led to a decline in marriage. It has been particularly acute in regions where well-paying jobs in male-dominated fields have disappeared because of automation and trade. In a working paper published in July, three economists studied how the decline in manufacturing jobs from 1990 to 2014, across industries and regions, “contributed to the rapid, simultaneous decline of traditional household structures.”

Which is why, when Trump promised to bring back manufacturing jobs, he was able to steal the rust belt from the Democrats and win election.

Labor market changes made men less marriageable, they concluded. There were fewer available men, because unemployment was associated with a rise in incarceration or mortality from drugs and alcohol. The men who were left were less desirable, because they lacked income and were more likely to drink to excess or use drugs.

But as I mentioned above, unemployment has decreased. The rise in alcohol consumption in the US is more bullshit. It has actually fallen since 1990: 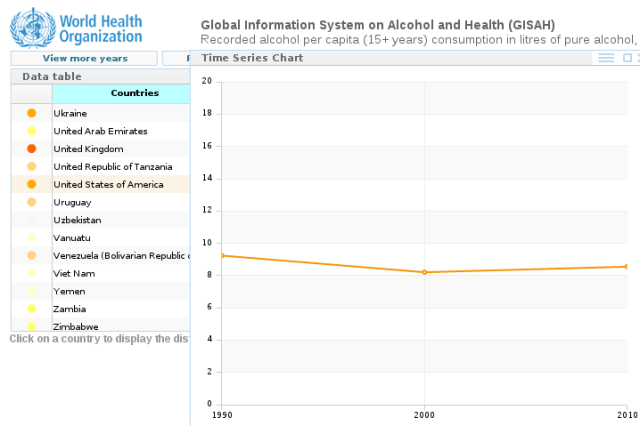 A bad economy lowers the cost of having bad values — substance abuse, engaging in crime, not looking for a job right away,” said Gordon Hanson, an economist at the University of California, San Diego, who wrote the paper with David Autor of M.I.T. and David Dorn of the University of Zurich.

Never-married adults cite financial instability as a major reason for being single, especially those who are low-income or under 30, according to a new Pew Research Center survey. Most men feel it’s important for a husband to be a financial provider, especially men without college degrees, according to another new Pew survey.

Men who’s incomes are low have a hard time marrying because of the welfare cliff. Women under 30 are waiting to start families. Men understand that most women are looking for someone who makes more money than they do.

Women, meanwhile, have learned from watching a generation of divorce that they need to be able to support themselves.

And yet 70% of divorces are initiated by women.

In reality, economics and culture both play a role, and influence each other, social scientists say. When well-paying jobs became scarce for less educated men, they became less likely to marry. As a result, the culture changed: Marriage was no longer the norm, and out-of-wedlock childbirth was accepted. Even if jobs returned, an increase in marriage wouldn’t necessarily immediately follow.

The reason that the culture changed is the welfare state. Women became less likely to marry men–not the other way around–because a man without a well-paying job could no longer add to family income, due to the welfare cliff. If women could increase their family incomes by marrying, most would.

Social scientists suggest more routes to good jobs, like through community colleges or apprenticeships. More affordable housing for young people would help, so they don’t move in together simply from economic necessity. Inexpensive and accessible contraception would help, too. Some have suggested expanding the child tax credit, and removing the marriage penalty for benefits like the earned-income tax credit.

College will help those capable of earning a useful advanced degree, though it’s not for everyone. Apprenticeships only help if there are jobs in trades. Affordable housing won’t help men attract women. Contraception is already inexpensive and accessible. Expanding the child tax credit might help to reduce the welfare cliff, but only once income is high enough to be taxed.

It’s clear from research that if relationships progressed more slowly, and childbirth came later, families would be more stable.

Yet women are waiting longer and longer to have children, and marriages are becoming less and less stable.

People with college degrees seem to operate with more of a long-term perspective, social scientists say. They are more likely to take on family responsibilities slowly, and they often benefit from parental resources to do so — like help paying for education, birth control or rent to live on their own. In turn, the young adults prioritize waiting to have children until they are more able to give their children similar opportunities.

I'm a software developer, and a writer of both fiction and non-fiction, and I blog about movies, books, and philosophy. My interest in religious philosophy and the search for the truth inspires much of my writing.
View all posts by jimbelton →
This entry was posted in philosophy and tagged alcohol consumption, birthrate, contraception, divorce, marriage, single motherhood, unemployment, welfare cliff, welfare state. Bookmark the permalink.