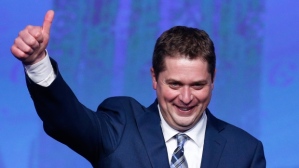 Today (May 27, 2017), we have a new Conservative Party Leader, Andrew Scheer. He narrowly beat (by 1%) Maxime Bernier, who many had expected to win. Who is Scheer, and what are his policies? The only thing I knew about him going into the convention was that he (like almost all of the candidates) was against the carbon tax.

According to the Globe and Mail, Scheer is Stephen Harper 2.0. They characterize him as a “sensible conservative” rather than a “dogmatic libertarian” like Bernier. Sad. To me, Bernier’s libertarian ideals made him interesting. The Glob quotes a bunch of platitudes spouted by Scheer in his acceptance speech. Then, finally some meat:

Mr. Scheer has a few odd planks in his platform – cutting funding to universities that don’t defend free speech, whatever that means; eliminating the now-substantial federal deficit in only two years.

Odd? How about sensible. What “that” means is that schools like my Alma mater, SFU, go out of their way to prevent speakers like Karen Straughn, a popular men’s rights activist, from speaking on campus. If universities are going to push identity politics over quality education like this, I agree that they should have their funding cut. And eliminating the deficit, which the Liberals under Chretien and Paul Martin worked so hard to do in the 90’s, should absolutely be done. Clearly, the Glob is not a conservative paper. Surprise, surprise.

Despite the Glob’s liberal bias, at least their coverage included some facts, unlike the fact free coverage of the National Post and the nearly so coverage by the CBC. While I find Scheer’s policies so far to be boring, as long as he steers clear of social conservatism–reversing the legalization of pot for example, which is one of the few Trudeau promises I like–he may be able to win my vote. If not, there’s always the Libertarian party.

I'm a software developer, and a writer of both fiction and non-fiction, and I blog about movies, books, and philosophy. My interest in religious philosophy and the search for the truth inspires much of my writing.
View all posts by jimbelton →
This entry was posted in philosophy and tagged Andrew Scheer, conservative party, globe and mail, maxime bernier. Bookmark the permalink.