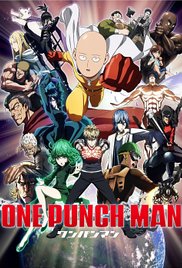 I just finished watching season 1 of the anime “One Punch Man”, available on (Canadian at least) Netflix. The series is Japanese, but has high quality English subtitles. The premise of the series is that the world is under constant attack by mutants, monsters, and aliens. The series is an interesting mixture of comedy and action. While not nearly as comical as “The Tick”, the series definitely plays for laughs at times.

The protagonist, Saitama, decides to become a hero and trains until he can destroy any enemy with one punch. Saitama starts out as a hero “for fun”. He takes on a disciple, a cyborg called Genos, then the two join an association for professional heroes. In the climactic episodes of the season, Saitama finally meets a worthy opponent. At the end of the season, a new plot thread giving Genos an enemy is opened and left dangling.

There is a dub (not available on Netflix), but I haven’t heard if it’s any good. As an action series, One Punch Man would be a dud, but most episodes have at least one moment that made me laugh out loud. I’m looking forward to the next season to see what happens to Genos, where they go with the only female character, the Terrible Tornado, and what happens next for Saitama.

I'm a software developer, and a writer of both fiction and non-fiction, and I blog about movies, books, and philosophy. My interest in religious philosophy and the search for the truth inspires much of my writing.
View all posts by jimbelton →
This entry was posted in movies and tagged genos, netflix, one punch man, saitama, series review, terrible tornado. Bookmark the permalink.