Review of “Star Trek: Beyond” 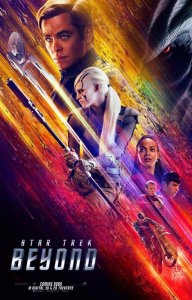 I spent part of New Year’s Eve watching the latest film in the rebooted Star Trek alternate universe (AU). It was quite good, with the main cast reprising their roles and Idris Elba under a ton of makeup playing the baddie. Simon Pegg (Scotty) cowrote the script for the film, with J J Abrams was once again producing. This was the worst of the three films, in my opinion, but only by a slim margin.

Not much about this film blew me away, which was surprising since it made many other’s top ten lists. There was no great message to be found, the edgy characters from the first film were muted, and Elba played a fairly stock bad guy. There is a big twist ending, but I didn’t find it that great. The cast did little more than play their parts, and new character Jaylah (Sofia Boutella) was a very weak love interest. Standing out among the actors was Karl Urban as Dr. McCoy.

I'm a software developer, and a writer of both fiction and non-fiction, and I blog about movies, books, and philosophy. My interest in religious philosophy and the search for the truth inspires much of my writing.
View all posts by jimbelton →
This entry was posted in movies and tagged idris elba, karl urban, movie review, simon pegg, sofia boutella, star trek beyond. Bookmark the permalink.

4 Responses to Review of “Star Trek: Beyond”