Dante Alighieri’s “Divine Comedy”, written around 1300 A.D., tells of his fantastic vision of hell, purgatory, and heaven. The first volume, the Inferno, has had incredible influence over our modern conception of hell. There are several free English translations available, but, while researching the Inferno for a book I’m writing (working title: Journey to Erebus), I decided to try to turn Dante’s work into an easy to read book in modern English.

I descended from the first circle down into the second, which encompassed less space, but so much more sorrow. 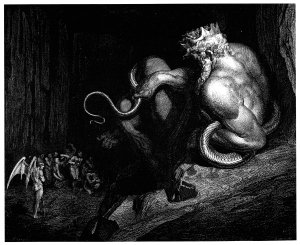 This was the abode of the horrible, snarling Minos. Each spirit came before him at the entrance, and confessed itself wholly. He examined the sins of each, judged it, and sent it on to its correct place in Hell. This he did by encircling himself with his tail as many times as the degrees he wished it to be sent down. There were always a crowd of them before him, and each went, in turn, to be judged. They spoke, heard his judgment, and then were whirled below. Then he saw me, and paused in the act of his great office.

“You who come to this inn of sorrow,” said Minos, “beware how you enter, and who you trust. Do not let the size of the entrance deceive you.”

“Why do you speak?” demanded Virgil. “Do not hinder his going. This has been willed where there is power to do what is willed; ask no more.”

We passed by. Now the sounds of sorrow were so loud that the lamentation struck me like a blow. We were in a completely lightless place that roared like the sea in a tempest, combated by opposing winds. The infernal hurricane never rested, carrying away the spirits, whirling, smashing, and molesting them. Those who arrived before its rushing blast shrieked, wailed, and lamented. They cursed the divine power. As Starlings are born by their wings bear in the cold season in a large, full troop, so that blast bore the evil spirits. Here, there, up, and down it carried them. They had no hope to ever comforted them, not for rest or even for less pain. Like cranes singing their laments, making a long line in air, the shades, uttering wails, were borne along by the storm.

“Master,” I said, “who are these folk whom the dark air punishes so?”

“The first of those you see,” said Virgil, “was an empress of many peoples. She so abandoned herself to the vice of lust that she made promiscuity legal to take away the blame she had incurred. She is Semiramis, who succeeded Ninus and had been his spouse. She ruled the land of Assyria, which the Sultan now holds. The second is Dido, who killed herself for the love of Aeneus, having broken faith with her husband Sichaeus after his death. Next is Cleopatra, the last Pharaoh, who married both her brothers, Caesar, and Mark Anthony. Then Helen, for whom the war with Troy was waged, and great Achilles, who in the end fought with love. There are Paris, who began the war by taking Helen from her husband, Menelaus, and Tristan, who loved his uncle’s betrothed, the fair Iseult.”

He showed me more than a thousand shades, pointing them out and naming them, whom love had taken from our life. I understood that those condemned to this fate were carnal sinners who subjected reason to their appetites. As Virgil named the ladies and great men of old, I was nearly overwhelmed with pity for them.

“Poet,” I said, “I would like to speak with those two who are together, and seem to be so light upon the wind.”

“When they come nearer to us,” he replied, “ask them by the love which leads them, and they will come.”

“O weary souls,” I called as the wind swayed them toward us, “come speak to us, if God does not forbid it.”

Like doves, called by desire, flying with wings open and steady through the air to their sweet nest, borne by their wills, the couple left the group around Dido and came toward us through the malign air, drawn by the strength of my compassionate cry.

“A living creature, gracious and benign, you come through the violent winds to visit us, even though we stained the world blood red. If the king of the universe was our friend, we would pray to him to give you peace, since you take pity on our perverse deeds. We will listen to what you have to say and tell you what you wish to know, while the wind is, as now, hushed for us,” said the woman. “The city of Ravenna, where I, Francesca, was born, is near the coast of Italy, just south of where the Po, swollen with the water of all its tributaries, descends to dissolve in peace in the Adriatic. Love, which may quickly lay hold of a gentle heart, made Paulo fall for the fair woman that I once was, and how it happened still hurts me. Love, which releases no loved one from loving, filled me with the urge to please him so strongly that, as you see, even now it has not abandoned me. Love brought us death together. The Plain of Caina awaits my husband, Giovanni, who ended our lives.”

As soon as I had heard that injured soul, I bowed my head, and kept it down.

“What are you thinking?” asked Virgil.

“How many sweet thoughts, and what great desire, led these two to this sorrowful place,” I replied. Then I turned again to the shade. “Francesca, your torments have brought me to tears. But tell me, how did your love make you succumb to your desires?”

“There is no greater sorrow than to remember the happy times when you are miserable, as your guide well knows,” she replied. “but if you must know how our love began, I will tell you, though it makes me weep. One day, we were reading, for delight, of Lancelot, and how love enthralled him. We were alone, yet no one suspected us of doing any wrong. Many times while reading we lifted our eyes to look at one another, and it took the color from our faces, but finally, it overcame us. When we read of longed for Guinevere being kissed by the one who so loved her, Paulo, who shall never be separated from me, kissed my trembling mouth. The book of Galahaut and he who wrote it were the purveyors of love. That day we read in no farther.”

While she said this, the shade of Paulo began weeping, and through pity I fainted, and fell senseless like a dead man.

Achilles fell deeply in love with one of the Trojan princesses, Polyxena. He asked Priam for Polyxena’s hand in marriage. Priam was willing because it would mean the end of the war and an alliance with the world’s greatest warrior. But while Priam was overseeing the marriage of Polyxena and Achilles, Paris, who would have had to give up Helen if Achilles married his sister, hid in the bushes and shot Achilles with a divine arrow, killing him.

I'm a software developer, and a writer of both fiction and non-fiction, and I blog about movies, books, and philosophy. My interest in religious philosophy and the search for the truth inspires much of my writing.
View all posts by jimbelton →
This entry was posted in writing and tagged achilles, cleopatra, dante alighieri, dido, helen, inferno, minos, paris, polyxena, semiramis, the divine comedy, tristan. Bookmark the permalink.