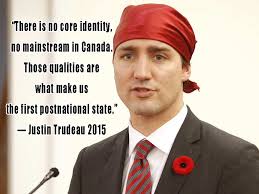 Clarity in our thoughts and writings is not a panacea that could solve all our problems but it is a necessary condition for all sound and responsible thinking. It seems that Justin Trudeau is trying to outdo his father, who gave us multiculturalism, in equally vague and nonsensical talk by talking about Canada as the world’s “first post national state” — Unless of course he means a country that will strive even more for universal values.

As far as I know in this country nobody ever tried to stop ethnic groups from speaking their ethnic languages within their communities, have their cultural centers, stores, restaurants  and festivals. So what has multiculturalism added to our Canadian way of life? I would say nothing desirable. The only thing that I see is the creation of ethnic ghettos here and there in the Canadian cities that add nothing to our society. I was walking on Kingsway street in Vancouver and I saw a store that had all its signs on the various products outside the store in Chinese. Out of curiosity I walked in to see if there were any signs in English and didn’t see any. A Chinese woman stood up from behind her desk and said: “No speak English”. Just like that and nothing else! She didn’t smile and didn’t say “Hello” or “I am sorry”. Only: “No speak English”!  Is that what multiculturalism is about?

Now we also have all these women with scarves covering their hair and a few with nigab covering their faces, clear signs of gender inequality and symbols of patriarchal power in many Muslim countries. Our faces are mirors of our souls. There are more than seventy messages that we convey with our facial expressions, most of them universal and some cultural. We express sadness and happiness, fear and anger, surprise and shame, etc. We recognize people on the basis of their facial features and expressions and thus judge the state of their minds and their character.

Covering of our faces is usually done for religious reasons or in order to conceal ourselves when we engage in immoral and criminal actions. But what about those muslin women who cover their faces with the nigab? Here the reasons are  religious and cultural and are unmistakeable evidence of backward and primitive societies that suppress women and make them second class citizens. Our mindless multicultural policy in Canada is to some extent responsible for allowing and protecting such primitive practices in our otherwise beautiful and civilized country.

The ultimate course of appeal for such uncivilized practices of the faithful is to a primitive mythological deity that sanctions such behaviors in their respective “holy books”.

What we need in our country is to continue to promote all the universal values of humanity that are prerequisites of genuine dialogue and civilization and to avoid all those doctrines, personal prejudices and  dangerous superstitions that undermine it. Among the innumerable prerequisites of genuine dialogue and all human flourishing are the ordinary moral and intellectual virtues of justice, honesty, respect for all human beings, cooperation, care for others, courage, fair-mindedness, open-mindedness, thoughtfulness, moral sensitivity, curiosity, patience,  honesty, exactness, industry, sensibility, elegance etc. Learning these is acquiring the ability to feel and to think, and the young will never acquire these abilities unless they have learned to listen for them and to recognize them in the conduct and utterances of others This ability cannot be learned separately; it is never explicitly learned and it is known only in practice; but it may be in everything that is learned. It cannot be learned separately; it can have no separate place of its own in a curriculum.

These virtues are universal excellences but are not absolute and detached abstractions; they are formed within particular histories, cultures and shared visions of the good life – they are not specific rules but open-ended ideals that must be pursued; they cannot be reached but only approximated. We do not expect all people to develop into moral heroes by performing superhuman acts, but we hope that most people will become decent moral agents and will share the essential features of a common vision of the good life. All human beings have the same basic needs for food, safety and shelter, and no human being wants to be misled, cheated, enslaved or tortured. We all consider certain acts as morally exemplary and laudable and others as unspeakable or appalling.  In education, we should not aim at the homogenization of the young — that is what authoritarian and doctrinaire regimes attempt to achieve with their primitive doctrines — but at principled pluralism where each person can achieve a measure of individual excellence. But the fact is that for each human being there is only the situated human view with our limited abilities, knowledge, experiences, outlooks and imagination; that view can be broadened and enriched through genuine dialogue.

(For a thorough discussion of the nature of dialogue, doctrines and indoctrination see my book: “Education as Dialogue: Its Prerequisites and its  Enemies”, McGill-Queens Univ. Press, 2010)

Canada has oppressive sign laws. Most notably, anti-English sign laws in Quebec not only required French on all signs, but mandate that it must be larger than the English on the sign. Similarly, all Chinese signs were banned in Richmond. While I agree that ghettos are bad, I support people’s right to self segregate. If a business owner doesn’t make the effort to learn English (or French in Quebec) they are cutting themselves out of a huge chunk of the market. The market only cares about one color: green. If there is a specialty that doesn’t translate (traditional Chinese medicine, perhaps), why do they need to speak English? Otherwise, all of the bilingual business owners have a competitive advantage, and eventually, the problem will be taken care of.

On the hejab and the nijab, I support peoples right to wear whatever they want. An exception is if a police officer or a pharmacist requires you to remove your nijab so that they can identify you. In that case, you must comply. Public health and safety trump (no pun intended) your right to religious expression. Knowing children, many young girls are not going to want to continue this tradition, so it will die out in time. My biggest concern is not multiculturalism, but the social justice movement that attempts to prevent just criticism of the sexism inherent in fundamentalist Islam.

With Prof. Kazepides’s critique of religion, I would again disagree. People have the right to practice any religion, provided they are not impinging on the rights of others. Government protection of illegal practices such as the Islamic prostitution rings in the UK due to fear of being called racist by the social justice movement is the real problem. As long as religious people are abiding by the laws of our country and not attempting to set up a double standard (e.g. bringing in Sharia law), they should not be subjected to government interference unless they break the law.

Kazepides vision of the morals and virtue that we should uphold is admirable. While I disagree with his arguments on multiculturalism, I share a deep distrust of those who push this agenda. Bringing in the best and brightest from other cultures and being able to work well with them fosters excellence. Wholesale importing of unskilled migrants, as has been done in Europe, has brought with it a wave of crime and placed an even greater burden on the already heavily taxed middle classes to pay for hundreds of thousands of people who are being added to the welfare rolls. If this is what Trudeau means by “post nationalism”, he will likely face a nationalist backlash like the one we have seen in the UK and the US in the next federal election.

I'm a software developer, and a writer of both fiction and non-fiction, and I blog about movies, books, and philosophy. My interest in religious philosophy and the search for the truth inspires much of my writing.
View all posts by jimbelton →
This entry was posted in philosophy and tagged hijab, justin trudeau, multiculturalism, nijab, postnationalism, sharia law, simon fraser university, social justice, tasos kazepides. Bookmark the permalink.