Why the Atheist “Argument from Diversity” is Fallacious 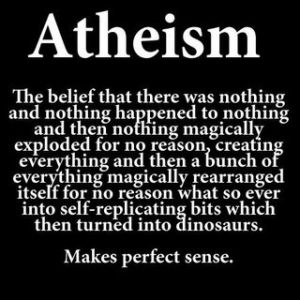 Note: This graphic is included only because I find it funny.

Stated simply, the atheist argument from diversity is essentially that religions contradict each other, and therefore its highly likely that no religion is true. I have a huge problem with this: A religion is not merely true or false. Religions are collections of ideas and doctrines. Any one of those can be false without invalidating the others. The statement would be true if all religions were fundamentalist, but they are not.

The conclusion drawn is usually something like the one on the page I linked above: “The best explanation for the fact that different religions believe different things about God and the universe is that religion and God are human constructs that do not correspond to any metaphysical reality.” I don’t see how this follows. Let me explain:

Think of the religious experience (and by this I mean what people experience via meditation, prayer, chanting, ritual, etc., as paranormal states of being) as a phenomenon, and of the different religions as theories that attempt to explain the phenomenon. When a scientist has multiple theories that conflict, his first thought is not “this must not be a real phenomenon”. No, it is to determine which theory best fits the facts. If no theory fits the facts, the scientist will not discard the facts as false. Rather, he will take his best theory and try to come up with a new theory that explains the facts that contradict that theory.

When the bizarre behavior of matter at the quantum level was first theorized, there were those, including Einstein, who doubted the theory. Scientists did not discard quantum theory. Instead, they designed experiments to confirm or refute it. Now, we believe that particles of matter exist as probability spaces, and that the act of observing a particle collapses its probability space into an exact location.

Discarding God (or at least the experience of God that people have when engaging in religious activities) because the current theory doesn’t perfectly explain the phenomenon would be akin to Galileo saying that, because none of the theories in his time adequately explained the behaviors of the planets, therefore the night sky must be mere illusion.

I'm a software developer, and a writer of both fiction and non-fiction, and I blog about movies, books, and philosophy. My interest in religious philosophy and the search for the truth inspires much of my writing.
View all posts by jimbelton →
This entry was posted in philosophy and tagged argument from diversity, atheism, sam harris. Bookmark the permalink.

7 Responses to Why the Atheist “Argument from Diversity” is Fallacious