The Evolutionary Psychology Behind Politics

I recently finished the book “The Evolutionary 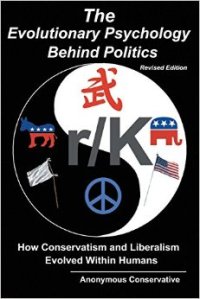 Psychology Behind Politics” by Anonymous Conservative. This book proposes that conservatism and liberalism are outgrowths of human psychologies that have evolved based on r/K Selection Theory. The book has influenced some prominent conservative thinkers, and is interesting and makes a reasonable case for the hypotheses its author proposes.

I’m going to offer my summary of the major themes of the book, as well as my own criticisms of it. To start, what does the anonymous conservative say:

While I find the theory to hold much truth, providing satisfactory explanations for  a lot of otherwise hard to understand historical events like the rise of Nazism, I do not agree with the author’s conclusions. If man were an animal, incapable of reason, perhaps we would be doomed to repeat the pattern of the rise and fall of the Roman empire over and over again. Fortunately, there is hope that we are (or at least can be) more than that.

The Anonymous Conservative’s assertion that liberalism will inevitably lead to a population explosion seems to fly in the face of the evidence of sharply declining birthrates in Europe, Canada, and Japan, which would also be occurring in America were it not for the massive influx of third world immigrants from Latin America. This phenomenon can be attributed to birth control. Humans are unique in our ability to override the inborn urge to procreate, and thus we have the ability to turn the tide of population growth before the carrying capacity of our world is exceeded.

I believe the threat posed by incautiously welcoming vast numbers of immigrants from less evolved cultures at a rate that doesn’t allow sufficient time for newcomers to be absorbed into our existing culture, as we are currently seeing in Europe, poses a far greater threat to western civilization than excessive breeding by the native liberal population, which is what the author contends will inevitably bring down any civilization. In fact, Japan is at risk of severe depopulation (see Japan’s depopulation time bomb).

Despite disagreeing with some of the author’s opinions and conclusions–I don’t believe that conservatism is innately good, nor do I find it entirely superior to liberalism–I found the book well worth reading. The theory holds real explanatory power, and seems to predict likely outcomes, assuming that thoughtful opinion is ignored and natural inclinations are mindlessly followed. Those looking to understand history and the subconscious psychology of man would do well to take the time to read it.

I'm a software developer, and a writer of both fiction and non-fiction, and I blog about movies, books, and philosophy. My interest in religious philosophy and the search for the truth inspires much of my writing.
View all posts by jimbelton →
This entry was posted in books, philosophy and tagged amygdala, anonymous conservative, anterior cingulate cortex, anxiety, birth control, book, communism, conservativism, depression, dopamine, liberalism, nazism, psychology, r/K selection theory, socialism. Bookmark the permalink.