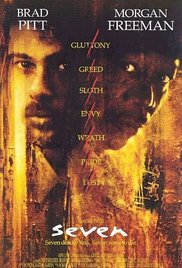 Morgan Freeman and Brad Pitt as two cops hunting for a serial killer (Kevin “House of Cards” Spacey) who is staging a murder for each of the seven deadly sins. Gwyneth Paltrow plays Pitt’s wife, who hates the city they’ve moved too. The film is widely held up as a movie of the same caliber as Silence of the Lambs. Se7en has an IMDB rating of 8.5/10.

This film has not aged well. The sound track is alternately quiet, then blaring. The palette is dark, the sets dismal, filthy, and decaying. The inner city is portrayed as hell on earth. The police are powerless to catch the killer, in the words of Morgan Freeman’s character, merely recording his acts in case the information is ever needed in the courts. This film is depressing. The message is one of despair.

I'm a software developer, and a writer of both fiction and non-fiction, and I blog about movies, books, and philosophy. My interest in religious philosophy and the search for the truth inspires much of my writing.
View all posts by jimbelton →
This entry was posted in movies and tagged brad pitt, gwyneth paltrow, kevin spacey, morgan freeman, movie, review, se7en, seven deadly sins. Bookmark the permalink.

3 Responses to Review of “Se7en” (Rewatch)