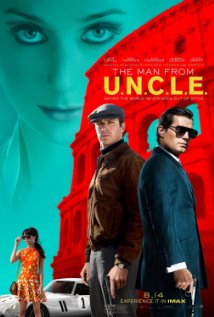 Henry “Superman” Cavill and Armie “Lone Ranger” Hammer star as rival agents turned allies trying to find the nuclear scientist father of Gaby, played by Alicia Vikander (Ava in Ex Machina) before a couple of villains can use dear old dad to create — wait for it — a nuclear bomb. “There are only two things that scare me, and one of them is nuclear war.”

Set in the 60’s (which is roughly when the TV series it’s based on first aired), the movie does a decent job of capturing the era. There are some annoying split screen affects that may be a nod back to the series, and the gimmick of recapping the plot points that lead up to a twist (M. Night Shyamalan style) is overused.

The story was good, the acting solid. Hugh Grant and Jared Harris (David Robert Jones in Fringe) have good support roles. There is nothing new here, and the cinematography is poor in places, but overall, the film was OK.

I'm a software developer, and a writer of both fiction and non-fiction, and I blog about movies, books, and philosophy. My interest in religious philosophy and the search for the truth inspires much of my writing.
View all posts by jimbelton →
This entry was posted in movies and tagged alicia vikander, armie hammer, henry cavill, Hugh Grant, jared harris, movie, review, the man from UNCLE. Bookmark the permalink.